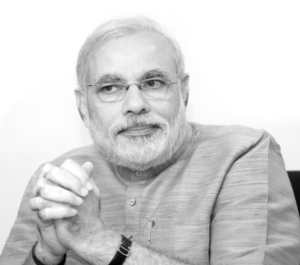 Narendra Damodardas Modi is the Chief Minister of Gujarat and is currently in his fourth consecutive term. He is a senior leader of the Bharatiya Janata Party and has been named its Prime Ministerial candidate in the run-up to the 2014 national elections.

Modi evokes criticism and high praise. He has been praised for his economic policies, which are credited with creating the environment for the high rate of economic growth in Gujarat. However, his administration has also been criticised for failing to make a significant positive impact upon the human development of the state.

Born on 17th September 1950 to a family of grocers in Vadnagar in Mehsana district of what was then Bombay State (present-day Gujarat), India, he was the third of six children born to Damodardas Mulchand Modi and his wife, Heeraben. While a teenager, Modi ran a tea stall with his brother around a bus terminus. He completed his schooling in Vadnagar, where a teacher described him as being an average student but a keen debater. Modi remained a pracharak in the RSS while he completed his Master’s in Political Science from Gujarat University.

He began by working in the staff canteen of Gujarat State Road Transport Corporation, where he stayed till he became a fulltime pracharak (propagandist) of the RSS. After Modi had received some RSS training in Nagpur, which was a prerequisite for taking up an official position in the Sangh Parivar, he was given charge of Sangh’s student wing, Akhil Bharatiya Vidyarthi Parishad (ABVP), in Gujarat. He has not looked back ever since.